With a little down time due to the Coronavirus I'm trying to get  a bunch of these Black Friday posts set up as possible.  I also realize that there are going to be a ton of 2019 cards to post about.

Next up is Robin's 2019 Allen and Ginter X card.  Topps has been doing the online A and G X for a few year's now.  I'm not a huge fan of the set.  Oh I like the look of the cards.  If this had just been a black base parallel I would have liked it just as much, but paralleling a set and repackaging it has another whole product seems to me like a big lazy cop out.  But to each their own.  I was able to snag this base card and Robin's base mini parallel, which I've already featured, during this last Black Friday event.  Nice to see Topps didn't bother fixing their numbering screw up either in this set. 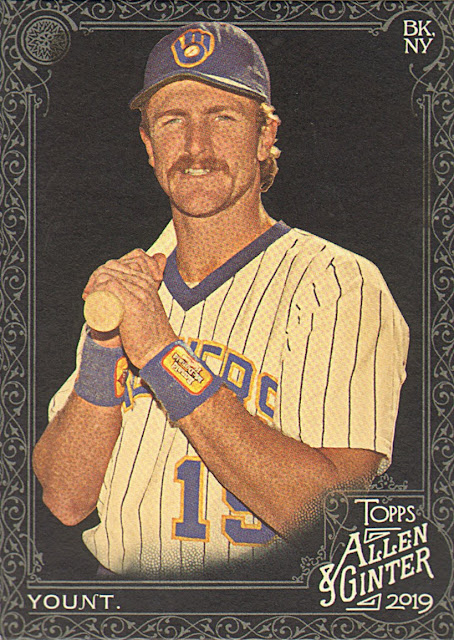 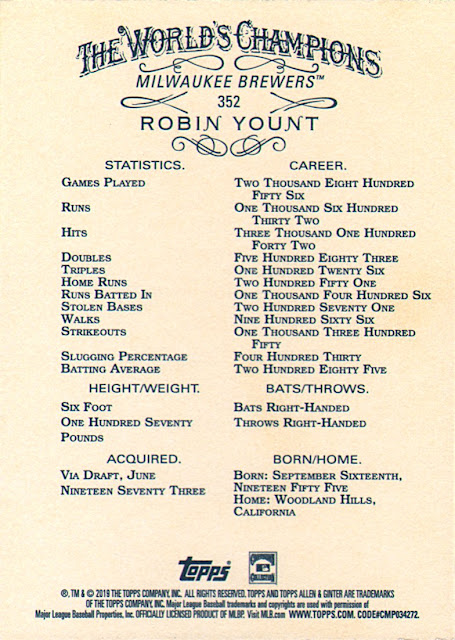 I've featured the base card and the blue parallel so far.  I was able to snag this black serial numbered parallel during Black Friday to add to the rainbow.  It's a great card with a great premise.  The choice of Yeli, Yount, and Fingers highlights 3 of the 4 Brewers who have won an MVP title.  Ryan Braun being the other player.  With Christian's new contract it's possible he'll retire a Brewer as well. 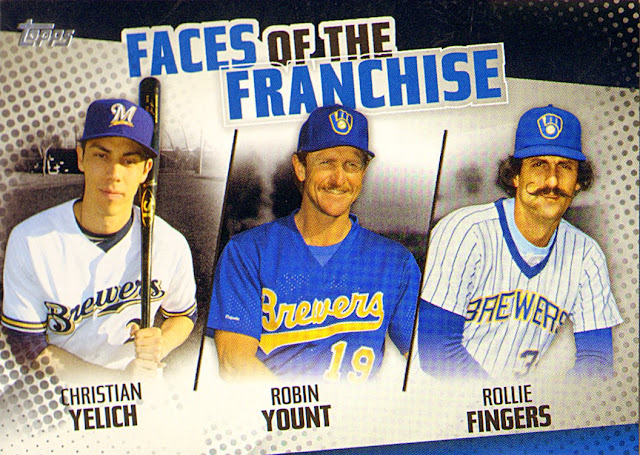 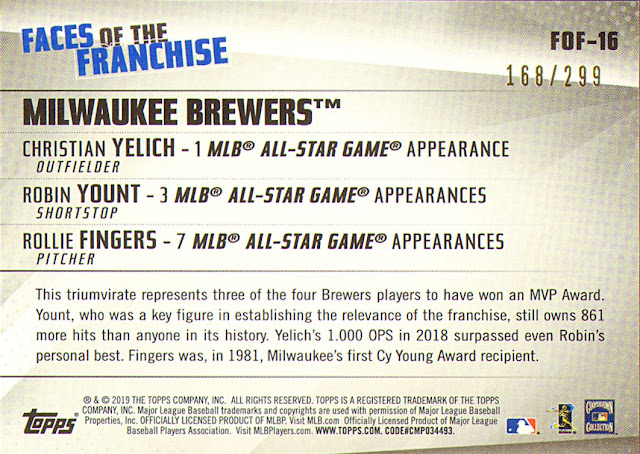 The last post featured Robin's first card in this insert set and now it's time for the other.  The 150 Year's of Professional Baseball Series 1 insert was subdivided into 3 sub-sets, Greatest Players, Greatest Seasons, and Greatest Moments.  This card celebrates Robin's great 1982 season in which he took the Brewers to their only World Series appearance and he won his first MVP title. 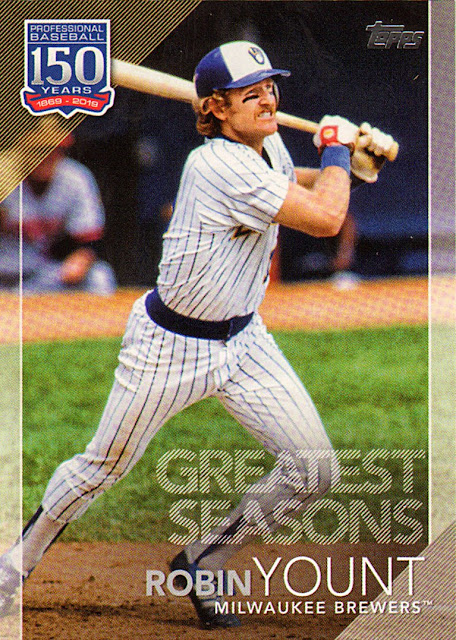 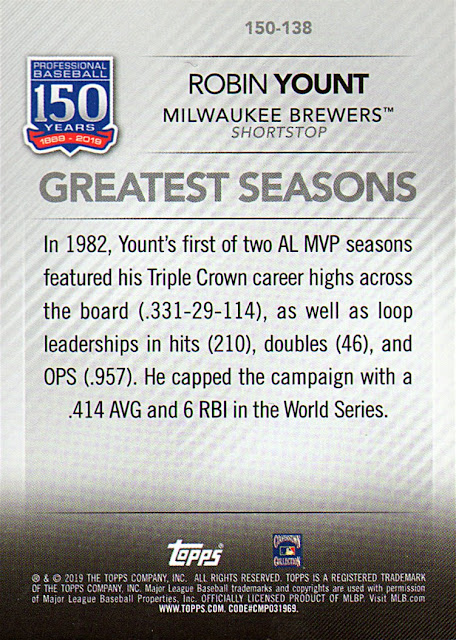 Posted by cynicalbuddha at 9:49 PM No comments:

Last year Topps celebrated the 150th Anniversary of professional baseball with multiple insert sets highlighting all sorts of topics.  One of the continuing inserts was the 150 Years of Professional Baseball.  Series 1 had 150 cards, Series 2 had 100 more cards, but this time broken down into the 3 separate sets, Greatest Players, Greatest Moments, and Greatest Seasons, with their own card numbers, and Update had another 100 cards featured, back in a single set.  Topps sure didn't want to make it easy.  Anyway, Robin has two cards in the set both from Series 1.  One in the Greatest Players sub-set and the other which I will feature later in the Greatest Seasons.  This card highlights his two MVP awards, 3000+ hits, etc. 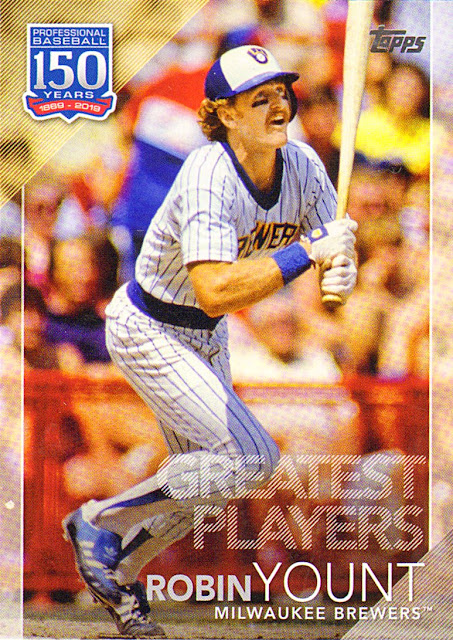 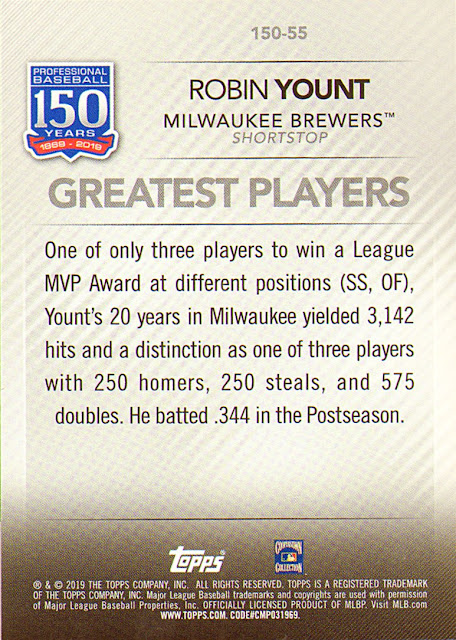 We got a double dip in 2019 with Robin getting a Legends Variation in Series 2 and again in the Update series.  Topps picked another great photo to use for Robin's card.  Personally I'm a big fan of these legends variations. First there's no doubt when you pull one of these that you have something special and it's a great way to get retired and HOF players into a new set. 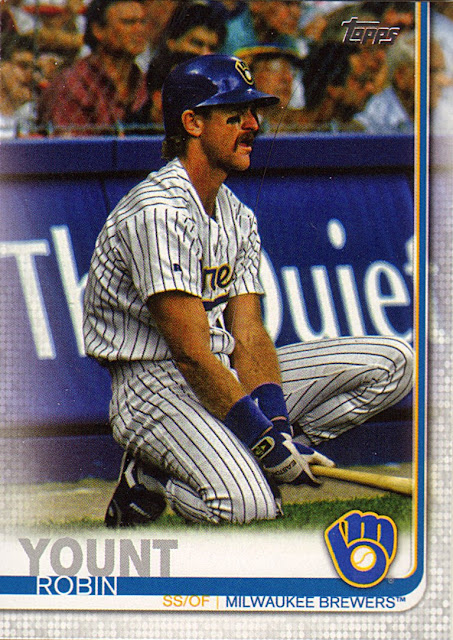 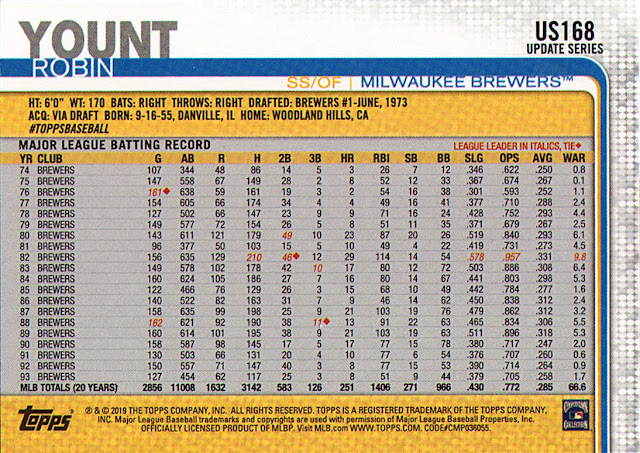 Posted by cynicalbuddha at 12:23 PM 2 comments:

Seems like a fitting card as Christian Yelich just signed a deal with the Brewers that will keep him in Blue and Gold through most of this decade.  Not only that with the emergence of Yelich's stardom he has supplanted Ryan Braun as the go to Brewers for the teams token representation in insert sets.  I'm not complaining, but I didn't want Braun to completely disappear as he pretty much has.  I find it unlikely that Braun will be a Brewer much longer, but he's still productive and an asset to the team so who knows?

The card links the two Brewers with their MVP titles.  Christian was in the running again last year until he got injured, but Bellinger more than deserved the title. 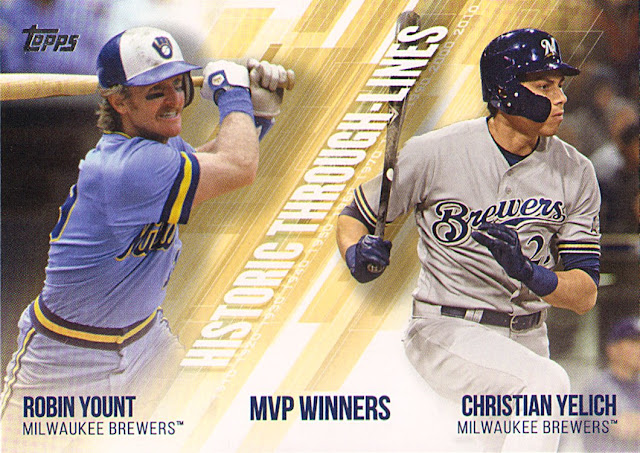 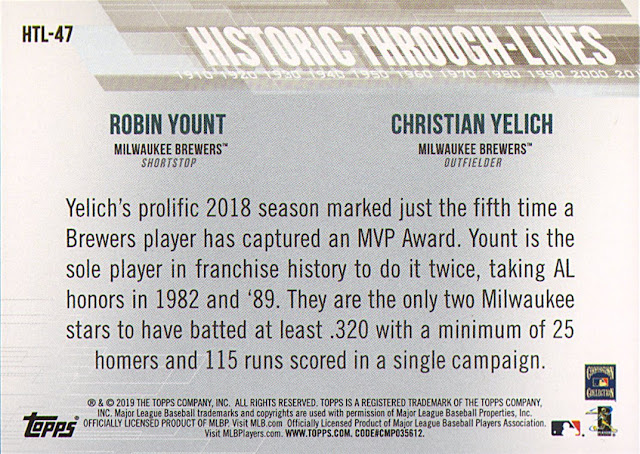 Still working my way through the new Yount cards I picked up last year and had delivered after COMC's Black Friday event.  Next up is Robin's 2009 Goudey 4 in 1 that he shares with Prince Fielder, Mike Schmidt and Ryan Howard.  Robin also appears on another card in this set.  I like the past and present theme of this card.  With Mike and Robin representing the past for their franchises and Price and Ryan the future (at least at that moment).  There are a few parallels to this set which pays homage to the 1935, hence the 35 prefix in the numbering, Goudey 4 in 1 cards. 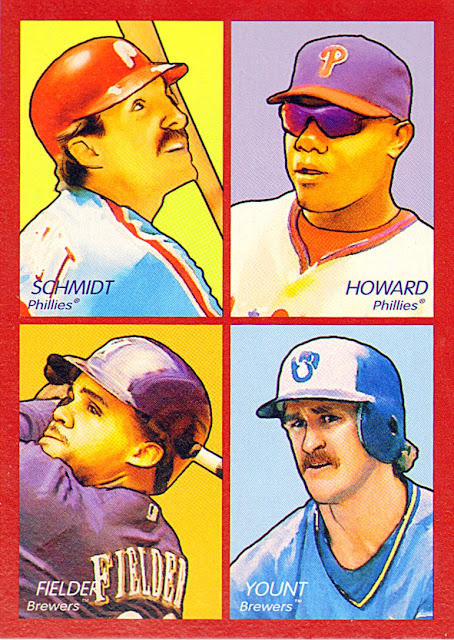 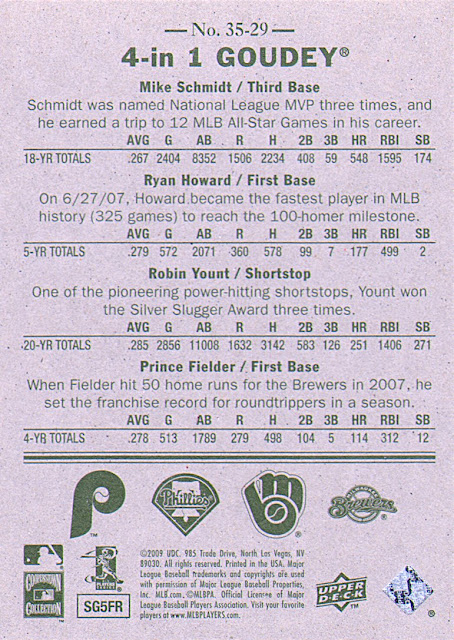 Posted by cynicalbuddha at 10:05 AM 2 comments: 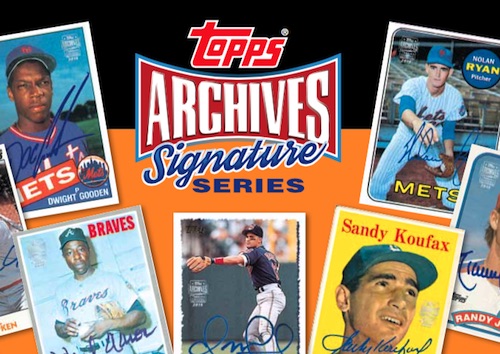 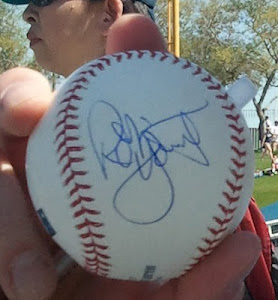